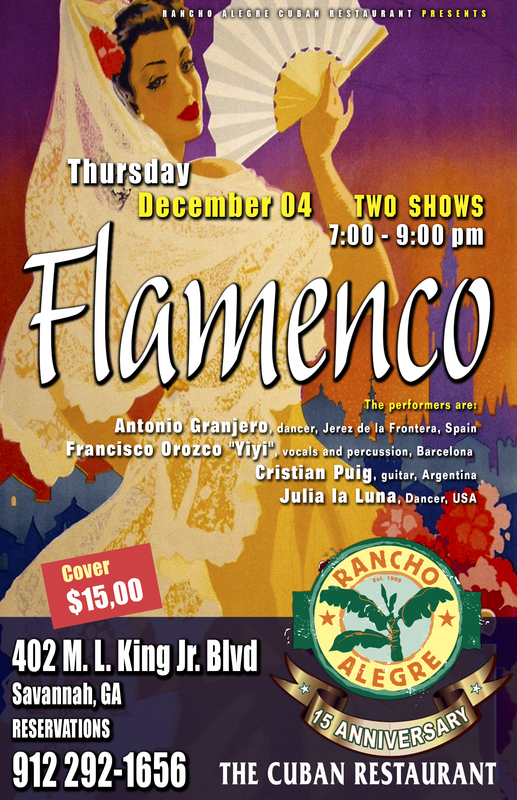 The fabulous cuadro will perform two sets of live Flamenco, showcasing the soulful lament of the Spanish Gypsy and the thunder of dancers’ footwork tied together by dynamic guitar and exciting shouts of “Olé”.  Artists are appearing in Savannah as part of a tour of Georgia, in which the group will also perform and teach in Atlanta.  They are managed by Atlanta-based Berdolé, a production company specializing in Flamenco.

Rancho Alegre Cuban Restaurant is located at 402 Martin Luther King Jr Blvd., Savannah, GA 31401. Reservations for the show may be made by calling (912) 292-1656.  More information about the restaurant, Berdolé, and the artists is available at the following links:

Antonio Granjero is the director and lead dancer of Entre Flamenco, a U.S.-based performing company bringing authentic Flamenco arts to the stage and studio across the United States of America.  He has performed before sold out audiences in the Unites States of America since 2005, when he presented shows at the Hobby Center Theater in Houston, Festival Flamenco de Santa Bárbara and the Empire Theatre of San Antonio, and the Lodge in Santa, Fe, N.M.

Granjero was born in Jerez de la Frontera, Spain. He began his studies of classical Spanish, classical ballet, and Flamenco when he was ten years old, and made his debut at age 11 at “Centro Cultural de la Villa” in Madrid. He spent the following years performing in theaters in Israel, Italy, England, Switzerland, France, Japan, Italy, France, and others.   In 1991, Granjero relocated to Madrid, where he shared the stage with such prestigious artists as Antonio Canales, Gerardo Nuñez, and worked with artists such as La Tati, Manolete, and El Güito.  Since then, Granjero has performed with companies, such as Maria Serrano Company (Sevilla), Esmeralda Enriquez Company (Canada), Susana De Palma (Minnesota) the Victor Monge “Serranito” Company. He has had the honor of performing at the most prestigious Flamenco festivals, including “Bienal of Sevilla” and “Festival of Jerez”.  He relocated to the United States of America in 1995, and about 10 years later established his own company to present Flamenco in America.

Francisco Orozco “Yiyi” is from Andalusian family, born in Barcelona, and was introduced to Flamenco rhythms at the tender age of four. Yiyi was trained by Flamenco singer and father– “Joselón de Jerez” – in his Spanish peña named “Peña Fosforito”. Considered a child prodigy of percussion Yiyi began his professional career at the age of twelve. By 17 years of age and one CD later, he became more involved with singing, particularly for dancers, and left Spain for Germany on a long-term contract with the company “Flamenco Rubio”. Since that time he has performed with “Compañia Flamenca Alhama” throughout Europe and Japan; with internationally-known María Benitez “Teatro Flamenco” on Broadway and throughout the U.S.; Domingo Ortega in Venezuela as well “Casa Patas” in Madrid; Jose Greco II in the United States of America and Taiwan; and world-renowned guitarist Serranito . He has also performed with Alejandro Granados, Yolanda Heredia, El Toleo, El Pelao, María Serrano, La Tania and Antonio Granjero. Critics, worldwide, have toted Yiyi’s performance as “fiery”, “riveting” his percussion techniques executed with “machine-gun speed” that possesses and “casts a spell”.

Cristian Puig is a Flamenco guitarist, composer, and singer with Gypsy roots in Jerez de la Frontera, Spain, and a string of artistic successes in film, in the recording studio, and live on stage. He played the role of guitarist and singer “Joaquin” in the Alliance Theatre’s 2013 production of “Zorro”, and he has worked in films, such as “A Late Quartet”, for which he composed Flamenco music for the soundtrack. He performs as a Flamenco singer and guitarist across the United States of America and with his Flamenco trio Puig-Sanchez-Moreno in his hometown of New York. Born in Buenos Aires, Argentina, Cristian Puig is the son of flamenco singer Gloria Monreal and Flamenco guitarist Pablo Puig. As a teenager, Cristian began his studies in classical guitar at the conservatory of Manuel de Falla as well as Flamenco guitar with his father. Soon he took classes in Flamenco guitar with Quique de Cordoba and furthered his studies in jazz, bossa nova and contemporary music. In 1990 he formed and toured South America with his group Rabat, fusing jazz, bossa nova and Flamenco. Cristian released the CD “Entre Cuerdas” featuring Flamenco-jazz fusion and has just released a new CD entitled “Inflam Project”, which crosses Indian and Flamenco styles.

Julie Galle Baggenstoss is a Flamenco dancer who focuses on bringing the art form to a variety of American audiences. She has performed and choreographed Flamenco with the Atlanta Opera, Georgia State University’s School of Music, The Latin American Association, Coves Darden P.R.E., and at universities and museums from the Southeast to the Midwest. She is a member of the faculty of Emory University’s Dance Program, where she teaches Flamenco as part of the university curriculum. Julie is a former instructor of the Atlanta Ballet, and teaches for organizations such as the American Association of Teachers of Spanish and Portuguese, the Foreign Language Association of Georgia, and Georgia Public Libraries. She currently tours her original shows for kids “Ferdinand por farruca” and “That’s Apoyo”, and performs in “Olé flamenco”, presented by Arts for Learning Woodruff Arts Center.   Off stage, Julie produces Flamenco performances and educational seminars involving Spanish Flamenco artists in residence in the United States of America. She also lectures on the history, evolution, and cultural significance of Flamenco and its artists.

Essential Question: How do flamenco artists and their audience understand and express emotion? Objectives:

As a result of the assembly program, students will:

UNESCO published a fabulous video, slideshow, and written description of flamenco at http://www.unesco.org/culture/ich/en/RL/00363. This is in response to the organization declaring the art form a part of the Intangible .

The New Yorker published a video of a young man working as a guitarist in Seville. It shows the side of Flamenco that is often left out of the dialogue about the art form. The video is in Spanish with English subtitles. The video is at http://www.newyorker.com/culture/culture-desk/video-solea-flamenco- seville

Flamenco is an art form of dance, guitar, and song, with Arabic, Indian, European, African, and Latin American influences. At its core, it is an improvised art form that depends on interaction among those making the action happen, as well as the witnesses who help create the excitement. Songs are sung in Spanish, as Flamenco developed in Andalucía. Lyrics portray daily life in Spain, and many times hold clues to the history of the people who created and popularized the songs.

Song lyrics to sing with performers (refer to joy that Jesus was born):

Song lyrics that performers will sing (refer to a procession to the church to offer good things to the newborn Jesus): ¿Pastor, que le llevas tú a ese divino clavel?

Literacy activities (for Spanish class and other classes):

Where is this taking place? Is it a real place or fictional setting? How could we get to the setting? (see maps) What do the song lyrics mean in English? Why would people sing about leaving behind the bad times and having happy times live? What bad times would you like to leave behind? What happiness would you like see to live? Why are people bringing things to a pastor? Who is bringing these things to the pastor? Where did the people get these things (the store, their farm, other places)? What will happen after these people give these things to the pastor? Can you write a story about the day that this sung?

About La Esperanza la del Maera, the singer who made the selected villancico famous:

Before viewing performance, ask students to consider these questions. Students should them after the show:

MOD.ICC.NM.2.3 3. Identify and appreciate differences in cultural perspectives and practices within familiar topics.

MOD.ICC.NM.2.4 4. Identify and interpret culturally-specific differences that impact newly-acquired concepts in other disciplines and leisure activities.

MOD.COD.IM.3.2 2. Connect common themes from other disciplines using a series of connected sentences.

MOD.ICC.IM.3.1 1. Present information on community activities, traditions and products using a series of connected sentences with many details.

MOD.ICC.IM.3.2 2. Express opinions on community activities, traditions, and products using a series of connected sentences with many details.

MOD.COD.IH.2.1 1. Understand extended discussions or presentations of authentic level appropriate texts containing familiar and some unfamiliar vocabulary from other disciplines.

MOD.ICC.AL.2.3 3. Understand the main idea and most details of practices, products, and perspectives for the target cultures in authentic texts and media on familiar and unfamiliar topics.

MOD.ICC.AL.3.1 1. Reinforce and further knowledge of cultural concepts and knowledge used in specific disciplines in the target language classroom.

MOD.COD.AM.2.1 1. Demonstrate understanding of extended discussions, presentations, most media programs and feature films or authentic texts from other disciplines at the appropriate proficiency level.

MOD.ICC.AM.2.4 4. Understand the main idea and details of practices, products, and perspectives for the target cultures in authentic texts and media on familiar and unfamiliar topics.

STANDARDS FOR MATHEMATICAL PRACTICE – ALGEBRA I, GEOMETRY, ALGEBRA II 2 Reason abstractly and quantitatively. 7 Look for and make use of structure. 8 Look for and express regularity in repeated reasoning.

the world and relations between nations

WG.3.2 Determine the unifying characteristics that regions possess and explain changes that they have experienced over time

WG.3.3 Explain how human and physical characteristics facilitate or hinder regional interactions WG.4.1 Determine the physical and human characteristics that comprise the identity of a given place

WG.4.3 Identify and analyze distinguishing human characteristics of a given place to determine their influence on historical events

WG.5.1 Describe and classify reasons for human migration in terms of push or pull factors to determine the changes and similarities in these factors over time.

7-H-1.2 Participate in various physical activities which include the cooperation of team work. 7-H-1.3 Pursue new activities that provide opportunities for individual activities and group activities.

2 Speaking part - Julie / lección de geografía Flamenco is from Spain, and we are not flamingos Projection: Map of Atlantic Ocean, Europe, Spain, Andalucía – locate U.S., Atlantic Ocean, Europe, Spain, Andalucía, specific city of Jerez Flamenco is seen in theaters, and it is also a way to celebrate in private settings. No one sells tickets to parties, and Flamenco often happens at parties. Let’s think of times when we have parties and we celebrate with music. We celebrate like this at birthday parties. Everyone sing with us!

4 Speaking part - Julie - lección de palmas Introduction of sevillanas as a song/dance used to celebrate in Andalucía Kids stay on stage and play palmas during sevillanas (lots of jaleos!!) Handle question set up: How are we interacting during the song/dance?

3 Spaking part – Julie / lección de jaleos What did we do to interact with one another while we were on stage? At Flamenco shows we shout jaleos at each other. The most famous is olé! You try it. Other cast members give other jaleos for kids to try Invite kids in audience & on stage to try it during the next song

1 Speaking part – Julie / introduce villancico At this time of year, there are Christmas parties called zambombas in Andalucía People sing songs called villancicos, and they dance, at the zambombas. Let’s try that!

Let’s see if we can form ourselves in the shape of a zambomba. Bring more kids to stage – they will sing -- put everyone in a circle Las Meninas Let’s try this together – don’t forget jaleos!

6 Speaking part - Julie / lección de zambomba vs. cajón Zambomba is the name of the party and the drum that they play at the party This is a zambomba: a friction drum This is a cajón: a drum that makes noise by tapping it (demonstration) The friction drum makes noise by when vibration passes through the drum head (demonstration) Let’s do our cierre together – kids on stage, audience, two drums